As many folks who follow this site are aware, a prison teacher was stabbed and raped at the AZ DOC a year ago; the court hasn't dismissed her case yet, thank god. Hopefully her suit will be a small vindication to those of you who haven't been able to hold the AZ DOC's feet to the fire on this issue - and a great use to those of you who are currently litigating on these issues, as well. This remark from the victim about who bears responsibility for the high level of violence in AZ prisons bears paying attention to, especially if you've lost someone to it:

"The attack raised questions about prison security after reports showed she was put into a room full of inmates with no guards nearby.

Authorities said Harvey had lingered behind after others left the room, then repeatedly stabbed the victim with a pen before raping her.

In a September interview with the AP, the woman said she primarily blamed Corrections Director Charles Ryan for putting her in danger. She said rampant understaffing meant no one checked on her while she was in the classroom."

Surviving the violence is a serious issue at the AZ DOC, as far as prisoners and the parents of prisoners, are concerned, too - like those of Neil Early, mudered at ASP-Kingman last month. Prisons are run by state and gang violence, and are thus inherently unsafe institutions to live or work in. But Arizona's are also grossly short-staffed (presumably so we can divert more money to the pocketbooks of out-of-state profiteers), so employees and prisoners alike are often left to fend for themselves. With plenty of blind spots to allow the prison heroin traffic to readily flourish (which sedates the masses, you see), the most vulnerable are easy prey.

That explains, in brief, why one union for AZ correctional officers, the Arizona Corrections  Association, has asked Judicial Watch to intervene due to the high incidence of assaults on officers under Ryan's tenure. In fact, Here's the AZCPOA 2011 letter of no confidence in Charles Ryan's leadership.  Note how the AZCPOA letter in that second link makes references to documents being routinely falsified and officers being punished for reporting security concerns.


Here is a list of links to other AzPW posts about prison safety, specifically for those of you helping someone fight the AZ DOC for protection from gangs, bad debts, racists, homophobes, or certain death out on the GP yards.


Follow the links above, and hold Chuck Ryan accountable for your loved one's safety by addressing him here: CRYAN@azcorrections.gov. Be sure you put your legislators in the cc line - they fund his department, even though the governor is his boss. Don't bother with Ryan's subordinates, unless they are actually helping you. Send all your communications about the danger your loved one faces to his in-box, and insist on confirmation that it's been received.

Meanwhile, if you cant print and send them the things they need yourself, tell prisoners to write to Phoenix ABC at PO Box 7241 / Tempe, AZ 85281. They should ask for info about the issue they're dealing with: folks at the ABC will send self-help articles about their rights, copies of relevant policy, etc. PHX ABC may also be reached via email at collective@phoenixabc.org. Or find them on Facebook here.

Finally, here is the list of attorneys I'd send you to if you needed help suing the AZ DOC. None of them asked to advertise with me, by the way - I put this together for you, not for them: 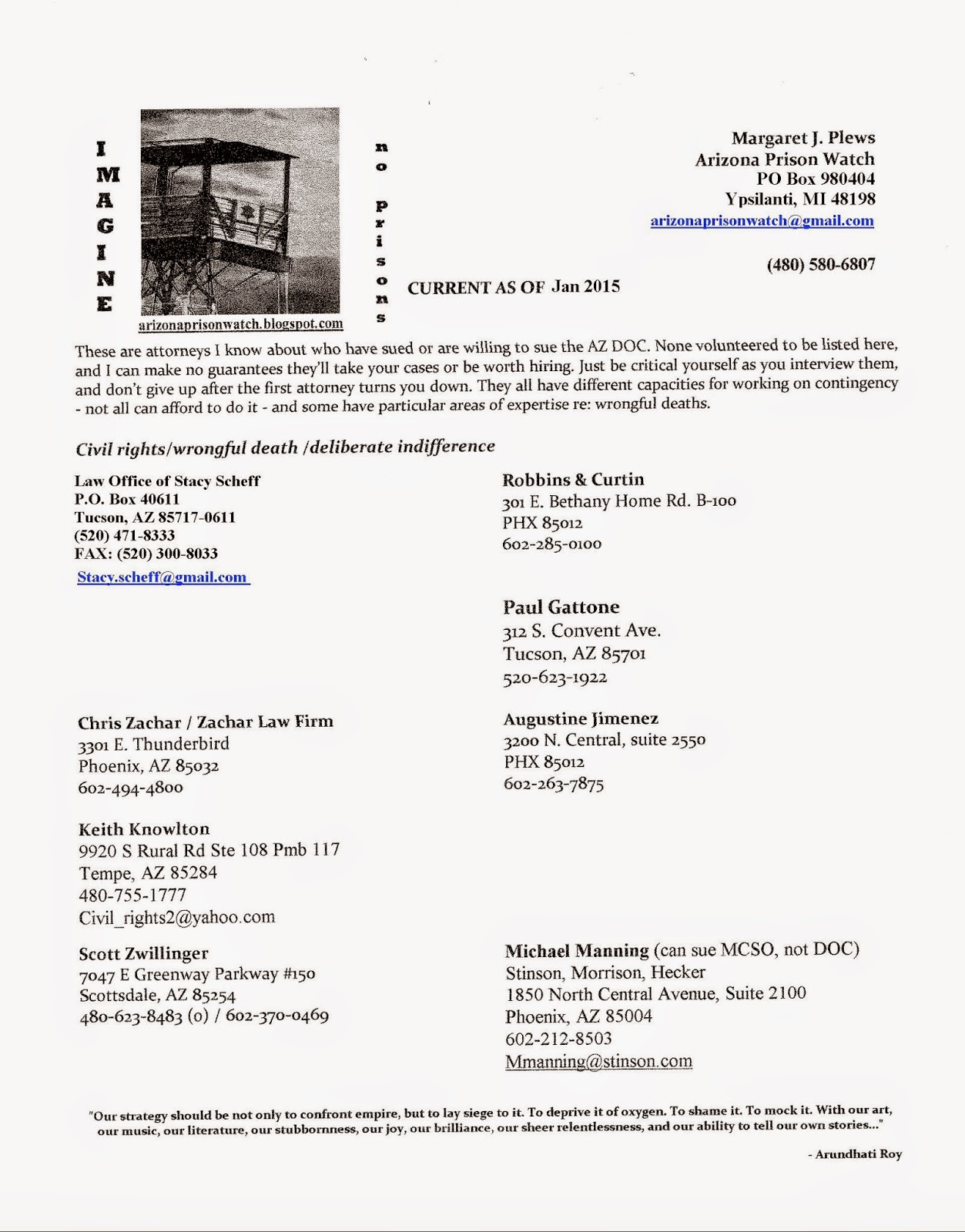 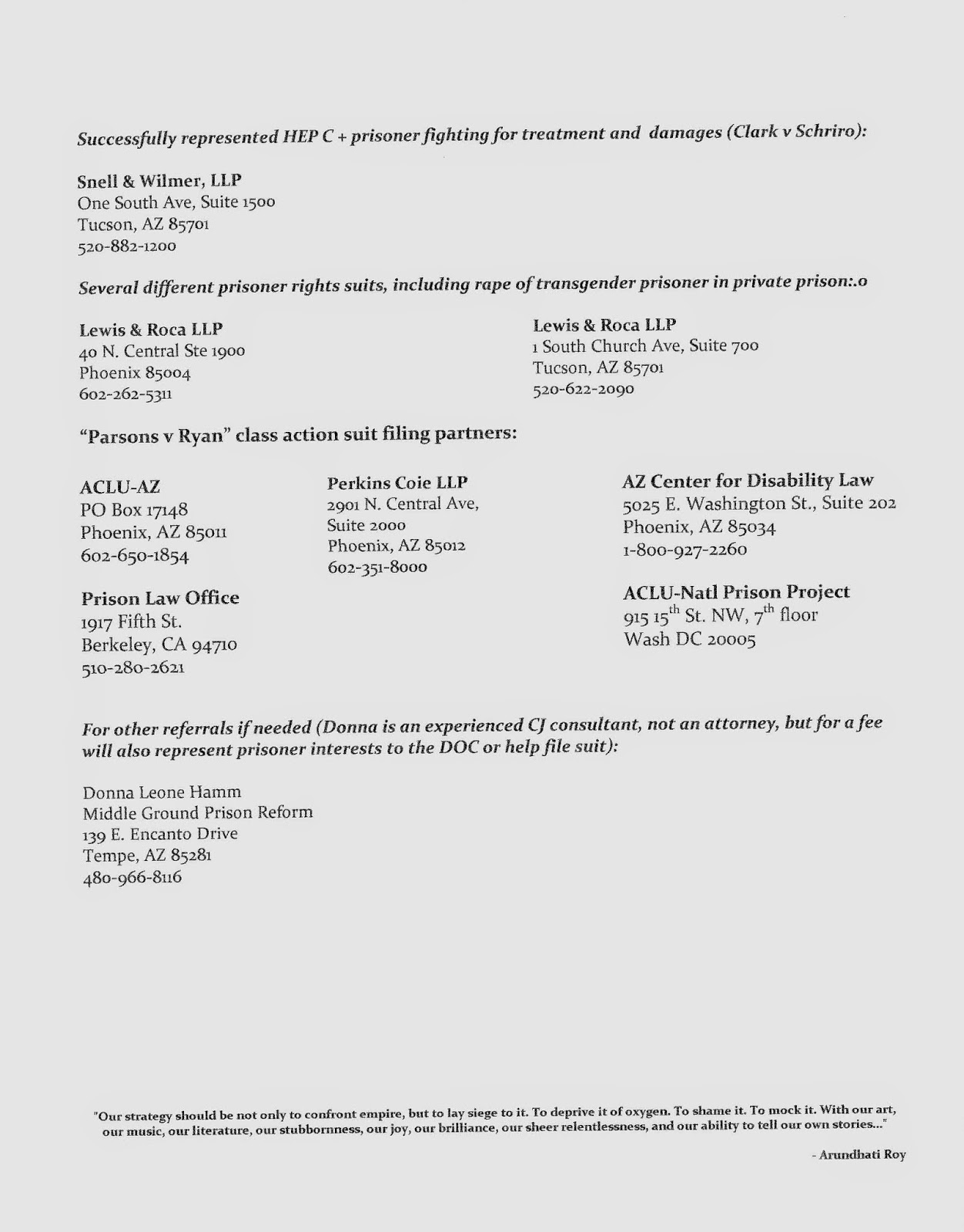 PHOENIX (AP) — Lawyers for the state of Arizona will urge a judge on Monday to dismiss a civil-rights violations lawsuit filed by a Department of Corrections teacher who was raped by a convicted sex offender in a prison classroom.

The lawsuit blames corrections employees for failing to establish proper security and the department's health care provider for improperly assessing prisoner Jacob Harvey's mental health. That allowed the then-20-year-old convicted rapist to be classified as a relatively low-risk offender and gain access to the classroom on Jan. 30, 2014.

A federal judge will hear arguments on the state's request to dismiss the case Monday. A deputy attorney general wrote that the teacher routinely worked in classrooms at the Eyman prison complex in Florence, and there is always a risk of assault when working with prisoners. He wrote the case should be dismissed because the teacher can't show the defendants had actual knowledge of or willfully ignored impending harm.
"By being placed in a classroom at the complex, the officers were not placing plaintiff in any type of situation that she would not normally face," deputy attorney general Jonathan Weisbard wrote.

The victim's lawyer says there is nothing normal about his client being placed unguarded in a classroom with convicted sex offenders.

"To the contrary, the complaint alleges in substantial detail (and plaintiff will prove) that there is nothing 'normal' or 'routine' about a teacher being left alone in a room for nearly ninety minutes with six or seven sex offenders and special needs inmates, including at least two who were convicted of violent sexual crimes," attorney Scott Zwillinger wrote.

The woman, who is not being identified by The Associated Press because she's a sexual assault victim, also is suing prison health care provider Corizon Health Inc. Lawyers for Corizon also are asking that the case be dismissed and deny wrongdoing.

A claim the woman made against the state before filing the lawsuit sought $4 million.

The attack raised questions about prison security after reports showed she was put into a room full of inmates with no guards nearby.

Authorities said Harvey had lingered behind after others left the room, then repeatedly stabbed the victim with a pen before raping her.

In a September interview with the AP, the woman said she primarily blamed Corrections Director Charles Ryan for putting her in danger. She said rampant understaffing meant no one checked on her while she was in the classroom.

"Safety's got to come before everything, and there's just this attitude that we have the number of staff we need because we say we do," she said.

A prison spokesman called the rape "a cowardly and despicable crime, for which the inmate is rightfully facing prosecution" and said safety is always paramount.

Harvey is awaiting trial on rape, assault, kidnapping and other charges. He has pleaded not guilty.
Posted by Margaret Jean Plews at 10:22 AM

The first month of the new year was not kind to Arizona's prisoners, at least three of whom died in the first week by their own hand, and one of whom was brutally murdered. What follows are death notices for January 2015. The AZ DOC seldom updates the public with information about a cause of death unless there's a compelling demand from media for it - and all they are inclined to tell us about at times like these are their dead prisoners crimes and punishments. If you have any information on any of these individuals' lives or their deaths, or are a loved one who needs assistance, please feel free to contact me. Peggy Plews arizonaprisonwatch@gmail.com 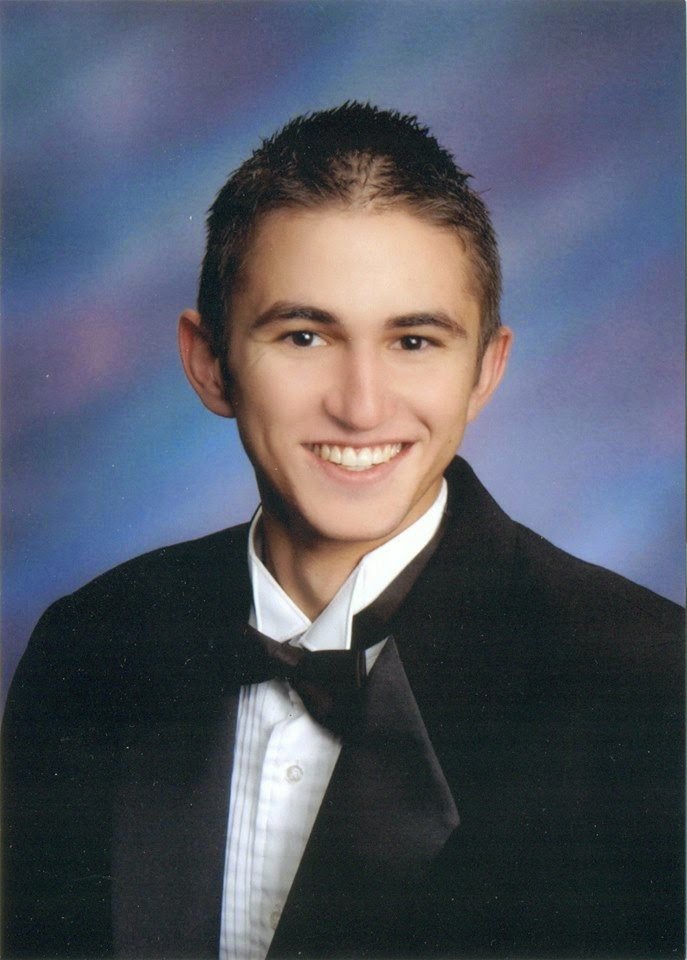 This was the AZ DOC's Director's statement about suicides on his watch after two guys killed themselves the same day, in the same prison. What I've seen is that Ryan's AZ DOC's methods of "suicide prevention" and "suicide watch" are so brutal and humiliating, with mentally ill prisoners in particular sustaining such emotional and physical abuse, that its no wonder more aren't sent home dead. This really sounds like Ryan is trying hard to look on the bright side of being mediocre ("average") about suicide prevention and response. I wouldnt find it acceptable, myself, if my own kid was inside - by not offering drug abuse treatment and mental health care where needed, Corizon is cutting corners where Ryan lets them, making a profit at the most severely impaired prisoners' expense...

“The Department of Corrections is dedicated to the safety and security of the general public, ADC personnel and the inmates in our custody.  Any inmate self-harm attempt is taken seriously and is thoroughly investigated.

This department has a goal of zero inmate suicides, and while one suicide is one too many, data from the federal Bureau of Justice Statistics indicate that ADC’s rate of inmate suicides was approximately 17 per 100,000 from 2001-2012 (the most recent annual data available).  This is nearly identical to the overall rate for the entire state population.

This data also shows that in terms of prison systems, 21 states had a higher rate than Arizona, 27 had a rate below, and one has the same rate as ADC. This places Arizona’s rate in alignment with national average.

In 2009, ADC instituted enhanced measures to address this issue. Those strategies include an integrated approach to mental health and suicide prevention that combines environmental, programmatic, operational, training and staff considerations. This begins for every inmate upon arrival at ADC where they are assessed for any mental health, medical and dental issues.

*FY 2015 as of 01/05/2015
**Actual inmate population as of 01/05/2015
Includes ADC and Contract Beds
ADP – Average Daily Population (for Fiscal Year)
Cause of death figures are subject to change based on official medical examiner reports, which may be issued in a subsequent month.
Posted by Margaret Jean Plews at 10:20 PM