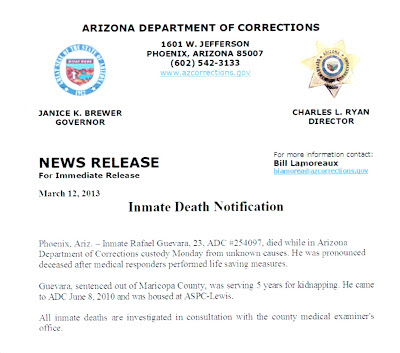 It seems like an awful lot of prisoners are dying young under Jan Brewer's administration; this fellow was only 23. Usually when I see "unknown causes" with a prisoner that age, it means he likely died of a drug overdose - occasionally it's something like an aneurysm. AZ DOC staff already have an idea of what happened from their investigation, I suspect, but they won't have pathology results for awhile, at which time they won't be putting out a new press release  - not unless they know they'll be liable for something and they want to make their victim (the dead prisoner) look especially unsympathetic.

The AZ DOC can't be trusted to give mothers accurate information about the deaths of their children. And the media seldom follows up on these cases when the word does come back about what really happened, so without other sources we could all stay in the dark. The darkness is what breeds all this violence, addiction, and despair behind prison walls, these days, folks - we need to bring this kind of thing into the light. That's one reason I do what I do... 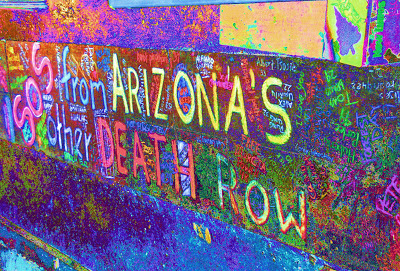 
That said, our condolences to Rafael's family, whatever the cause of his passing. If anyone is in touch with them, please pass my contact info along (Peggy Plews at arizonaprisonwtatch@gmail.com or 480-580-6807) and let them know I'm here to help with information and support however I can. I've seen too many other families go through this - they've been organizing, though, and they're here and willing to be of help, too.

Also, if anyone else out there knows about what happened to Rafael, please let me know so I can stay on top of what's happening inside and pass relevant info along to his family or their attorneys. They need to know about the class action lawsuit, Parsons v Ryan about medical neglect and psychiatric abuse in AZ's state prisons;  the riots and the proliferation of drugs, gangs and violence ; the lack of substance abuse treatment behind bars; and the doubling of the suicide and homicide rates under the DOC's current directorship of Chuck Ryan.

All of those things together suggest that the level of deliberate indifference to prisoners' lives is pervasive and institutional and comes from the top - not from just a few bad apples in brown with badges, as the state wanted us to believe when Marcia Powell died in that cage four years ago.

I'm also open to feedback from you, Bill Lamoreaux. If you or Chuck think I'm representing the ADC unfairly and  your propaganda machine can't keep up, you know where to find me.