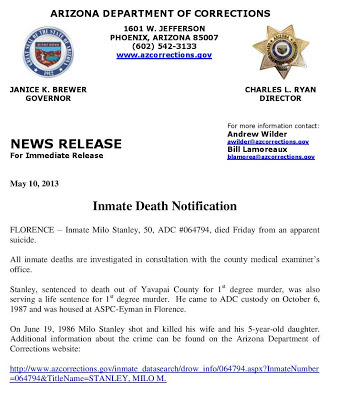 PHOENIX (AP) -- An Arizona death row inmate who murdered his wife and young daughter nearly 27 years ago died Friday in what the Department of Corrections called an apparent suicide.

The department said Milo Stanley, 50, was found hanging in his cell at a unit of the Eyman prison complex in Florence and that his death would be investigated by the department and medical examiners.

Stanley was convicted in Yavapai County of fatally shooting his wife, Susan, and 5-year-old daughter, Seleste, in 1986.

A Corrections Department description of Stanley's criminal history said he shot both victims in the head during an argument with his wife over his drinking.

He then dumped the victims' bodies on the side of a road in a remote area, returned to his Clarkdale home and put his 1-year-old son to bed and called police to report his wife and daughter missing but confessed the next day, the description said.

After a 2 1/2-week trial in 1987, Stanley was convicted and then sentenced 2 1/2 months later to death for killing his daughter and to life in prison for killing his wife.

A federal court docket indicated that Stanley had an appeal pending with the U.S. 9th Circuit Court of Appeals regarding whether he received effective legal representation during sentencing.

Paula Harms, an assistant federal public defender listed as representing Stanley in the appeal, did not immediately return a call for comment.

In a separate matter, Stanley was among six Arizona death row inmates who were plaintiffs in federal litigation challenging Arizona's execution protocol as unconstitutional. In that now-ended case, federal courts upheld the protocol, but the state made some procedural changes sought by the inmates' attorneys.

The last suicide of an Arizona death row inmate took place on March 14, 2010, when James Adams, 46, was found hanging in his cell.

© 2013 The Associated Press. All rights reserved. This material may not be published, broadcast, rewritten or redistributed.
Posted by Margaret Jean Plews at 8:24 AM