In the first 2 1/2 years of his tenure, Chuck Ryan presided over 28 suicides. That's almost one per month. During that time the prison population remained relatively stable - even dropping a bit last year. In the 2 1/2 years that preceded Ryan, under Dora Schriro, there were only 12 suicides - less than 1 every two months.

Additionally, both Shannon Palmer and James Jennings were murdered by their cellies because Shannon and James were psychotic and isolated with intolerant cellies (in Shannon's case, his cellie was also psychotic).

Most suicides occurred in higher security settings and isolation cells - as best as I can tell, all but one of the women who killed themselves in their cells were in some kind of solitary confinement.

Several things that I know of changed when Chuck Ryan took over the ADC that may have affected these outcomes. According to retired deputy warden Carl Toersbijns, almost immediately the policies for how to house certain prisoners together changed (two other prisoners - not mentally ill, were subsequently murdered by cellies), and a suicide prevention program that used prisoners as aides to help identify and support other suicidal prisoners was cancelled, despite the relatively low cost of the program.

I haven't cross-referenced the prisoner population by race and don't have some other stats for before Ryan took over. But the suicides that occurred on his watch are by and large young minorities. The white prisoners (and one African American) who took their own lives tended to be older men facing long sentences for violent crimes; a couple of pedophiles were among them. The youthful ages and minority status of the rest - and the relatively short sentences they had by the time they died - are quite disturbing.

From the data above, I would argue that the mental health of young minority prisoners seems to be taken less seriously than that of white prisoners, across the board. This is often the case in the "free world", as well - though on the outside, white males tend to have the highest, not the lowest, suicide rates. Minorities, by the establishment, are perceived as dangerous to others more so than to themselves, whether or not an individual's case or evidence exists to support that.

It is not uncommon, though, to find that many prison suicides are by individuals with a history of violence - at least two of the women who killed themselves had a history of assault in prison - which may be why they were in maximum security at the time they died. Unfortunately, maximum security means more isolation and restrictions, not necessarily closer supervision. Punishing prisoners by cancelling visitation and phone privileges seems like a set-up for more anti-social behavior, and undermines the rehabilitative process - two good reasons why the new $25 fee for visitors should have never been imposed, as it will cost prisoners a certain amount of community support and pro-social relationships (which are often so important to maintain to prevent further violence against others or oneself).

A significant number of the prisoners who suicided struggled with a previously-diagnosed psychiatric disorder. The prison psychiatric care is substandard, though, and access to the prison psychiatric facility where serious therapy is done is extremely hard to gain. Susan Lopez, for example, hung herself after two days of begging for help - including psychiatric hospitalization, and being ignored. That goes for most of the states jails, too. Just a week before she did herself in, Susan had been in the Greenlee County Jail where she was brutally strapped into a restraint chair by guards for being agitated on the phone and having a panic attack. She was sent to the hospital for unknown reasons soon after that traumatic incident.

I've heard numerous stories in the past year of how prisoners aren't getting their psychiatric meds, presumably because of the budget cuts. Tony Lester was off all his meds and getting psychotic when he cut his throat. Shannon Palmer and his cellmate, Jasper Rushing, were both seeking protective custody due to their paranoia when they were housed together, and neither - according to their families - were on anti-psychotic medicine at the time Shannon was murdered and castrated. The cell they were placed in should have only held two men for no more than 24 hours, because it was originally built to keep just one man in solitary. Instead, they were kept in that tiny cell together - without light or psychiatric care - for three weeks. When Shannon handed the guards a kite begging them to let him out of the cell with Jasper - just a day or two before he was killed - they simply laughed at him. That kite has not yet been found. I suspect this is typical of how the mentally ill in Arizona State Prisons are treated today.

Carl Toersbijns, the retired DW I referenced earlier, has done extensive blogging on the treatment of the seriously mentally ill in Arizona's Department of Corrections - check out his site here. He's also written quite a bit about alternative programming and policies that may hep reduce both the suicide and homicide rates among prisoners with psychiatric disabilities, while also improving the level of care for other at-risk prisoners. Before retiring, Carl worked in the Supermax, ASPC-Eyman, where many mentally ill prisoners are driven to psychosis and despair in isolation instead of being in a treatment setting; he knows of what he speaks. Unfortunately, the ADC seems to regard him as a traitor for his criticisms, and hasn't picked up on any of his suggestions.

In the face of the criticsm many of us have had about their suicide rates and psychiatric programs, the ADC released the following letter to the Mental Illness and Criminal Justice Commission defending themselves by minimizing our concerns and profiling a token program or two that few prisoners can even qualify for. See that memo here.

Read it for yourself, but there is no good explanation that I can see for why the suicide rates have skyrocketed under this administration - and since they fail to even acknowledge how much they are failing, I'm not optimistic that they will properly analyze those deaths and come up with more effective suicide prevention practices. Rather the memo justifies the policies and practices they currently employ, avoids confronting the possible reasons for high suicide rates, and attempts to marginalize the rest of us from the conversation as being ill-informed or even malicious. Let me remind folks that Carl Toersbijns has decades of corrections' experience, including extensive work with mentally ill prisoners, and is particularly familiar with Arizona's Special Management Units.


Finally, while the memo argues that Director Ryan implemented programmatic and staffing changes in 2010 to respond to the high suicide and homicide rates (which they wouldn't even really admit to), the data since then shows an even higher body count than before. And in no place in the ADC's response is there a satisfactory discussion of the mental health and treatment needs of women prisoners, who are the most neglected...nor does it explore the stats that concern community advocates by race, crime, custody level, or age. As long as they deny the problems they have delivering adequate mental health care to prisoners, they won't be able to effect meaningful change.

Therefore, as I've done so often lately, I'm urging readers - especially the survivors of these prisoners - to contact Representative Cecil Ash at the Arizona State Legislature. Representative Ash is chair of the House Health and Human Services Committee, which seems to be the most appropriate place from which to organize a legislative investigation into the deaths and the poor mental health care in the state prisons. Ask him to convene legislative hearings into the state prisons (including testimony from prisoners and their families). The legislature has the authority to open an investigation, compel testimony, and bring many more resources to the table than those of us in the community can. Time is running out before the next prisoner takes his or her life, so please put the pressure on now. Rep. Ash can be reached at:

AZ State Legislature 1700 W. Washington St Phoenix 85007
Cecil's email address is cash@azleg.gov - but handwritten letters in the US mail make more of an impact - emails are too easily lost.

If you are the survivor of prison violence, then I'd also suggest that you try to make an appointment with him to advocate for an agency-wide investigation into the practices and patterns that are causing this level of violence and despair in our prisons to grow. He's a sincere man - very interested in the plight of our prisoners and their families - and will give you the time of day if he has it. The legislature's phone number is 602-926-5999.

Feel free to contact me with any questions - or even criticisms - regarding this post. Blessings and condolences to all of you who have lost a loved one to prison violence, abuse, or neglect. If you want to organize with other such families, please let me know. 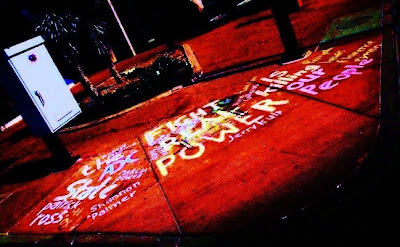