Deaths in Custody: National Day of Remembrance For Murder Victims. 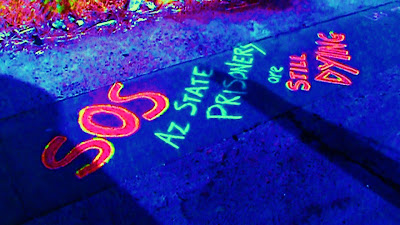 I spent some time this past week combing through resources for homicide survivors, trying to pull together something useful for survivors of prison violence today. I was pretty discouraged surfing murder victims' rights pages. It was the victims' rights movement that successfully helped pass a law in Arizona - and across the country - that even further marginalizes prisoners who are victims of violence - and their survivors.

More specifically, the Arizona Constitution explicitly precludes anyone who was victimized "while in custody for an offense" (or their survivor, if they died as a result) from being covered by any provisions of the Victims' Rights Amendment. How then, can they possibly hope to embrace, assist, or represent families of prisoners like Dana Haywood Seawright, Shannon Palmer, James Jennings, and Jeremy Pompeneo - all whom were murdered in state custody this past year. They have long since relegated prisoners to a status undeserving of having equal human rights when it comes to life and safety. The movement left these people behind without any apparent thought.

As a consequence, when Kini Seawright was on the verge of homelessness this year after her son Dana's homicide destroyed her life, the Arizona Criminal Justice Commission refused to provide her with access to any state-funded victims rights' services because she didn't qualify as a real victim. Dana was killed in prison by the West Side Crips for being friends with a Mexican - he was defying the racism and the gangs, not running with them. He was trying to take a class at Rio Salado and wanted to get some kind of counseling for his manic-depression and childhood abuse issues. He was beaten into a coma and stabbed repeatedly for refusing to carry out a gang-ordered hit to prove his racial loyalty. He died four days later.

Dana's homicide case was closed by the Department of Corrections' own Criminal Investigations Unit without any suspects being referred for prosecution - or even being given a ticket for the assault causing Dana's death. His mother has been working actively to get an outside law enforcement agency to re-open the case in light of evidence that guards were complicit in Dana's death. She's also suing the state of Arizona, as well as a number of individuals who appear to be liable for his murder. In the meantime, however, she suffered severe financial hardship and social isolation, for which she is not eligible to receive state assistance designated for helping victims of violent crime in such situations. An excerpt from the e-mail to that effect is here:

I have received a response to my follow up inquiry. After clarification it is ACJC’s position that the compensation program is only accountable to those statutes and rules that directly govern the Compensation Fund. Therefore, under program rules Ms. Seawright is not a victim pursuant to the definition of “victim” in A.A.C.R10-4-101(29). She is a “derivative victim” under ACJC’s rule, A.A.C.R10-4-101(10)(a), however, she is not entitled to a compensation award pursuant to A.A.C. R10-4-106(A)(3)(b) because the victim of the criminally injurious conduct was serving a sentence of imprisonment in a detention facility at the time of his death. Therefore, the prerequisites for a compensation award have not been met in this case...

I can't believe that was the intentions of the victims' rights advocates in Arizona who helped get that initiative passed, but that was the consequence.

I've blogged about the Victim's Rights Amendment in the Arizona Constitution before - read my letter to the Arizona Department of Corrections on the matter here. I hope to spend more time getting organized behind a movement to change it. There are far too many families like Kini's being wrongfully punished and exiled under it. Failing to protect victims in custody gives license to law enforcement to use excessive force, and for prisons and jails to mete out cruel and unusual punishment as they see fit, not as the judges ordered. It suggests that toll of violence on one group of homicide victims and their survivors is less important than when it hits the rest of us. The state victims' rights amendment creates a sub-class of citizens whose victimization - usually at the hands of the state - we are willing to not only ignore but actively minimize. It serves to reduce the states liability profile when people are hurt in their custody - including pre-trial detention, when we're supposed to be presumed innocent.

I urge those of you concerned with the civil rights of prisoners and their loved ones to contact your state legislators and ask for help changing the definition of a victim to include those in custody for an offense. The legislature is empowered to extend victims rights to everyone - it doesn't have to go to referendum. Tell your legislator that victims of state crimes matter, too. He or she can be reached at:

Finally, if you are a survivor of prison violence or have lost a loved one to it - or simply want to make a difference - please feel free to contact me. My number is 480-580-6807. I'm organizing with families now who want to see an end to the neglect, abuse, and violence now.
Posted by Margaret Jean Plews at 12:41 PM