Many folks wonder what I do with the art I create, and why I bother chalking sidewalks when they just get washed off once I leave. The chalkings are multi-functional: they leave a message for the person or entity whose walk I'm chalking, and when I shoot them they deliver my message all over the world on Facebook and my blogs. I have a really cheap, crummy camera, so I learned to make the most of it by manipulating the colors to make these postcards with. I send them to decision-makers, allies, prisoners, media, etc. to raise awareness and show solidarity and struggle with those suffering the most. Feel free to download any of my art and do the same. I do this all with nothing more complex than the Windows image editing program that came with Vista.

We do still have a crisis in the prisons, by the way. The ACLU is about to sue over medical neglect, but the culture of contempt for prisoners and the pervasive despair and violence behind bars is unchecked. It's a poison that trickles from the top down. By far, those dying are the most vulnerable among us - not the vicious punks or molesters people think are the ones who get it in prison, and therefore don't care about. Those committed to protecting the rights of the mentally ill and developmentally disabled in the community should especially care about what's happening in the state prisons, because that's where so many are still heading.

This is what I did with the mural Kini Seawright and I did yesterday at the Herberger - her son was murdered for loving a Mexican. Brewer needs to be held accountable, too: All these deaths after all, are not only Chuck Ryan's - they're hers - and the longer she leaves him in charge the more culpable she is for the next suicide or homicide of someone's child, mother, brother, or friend in prison. 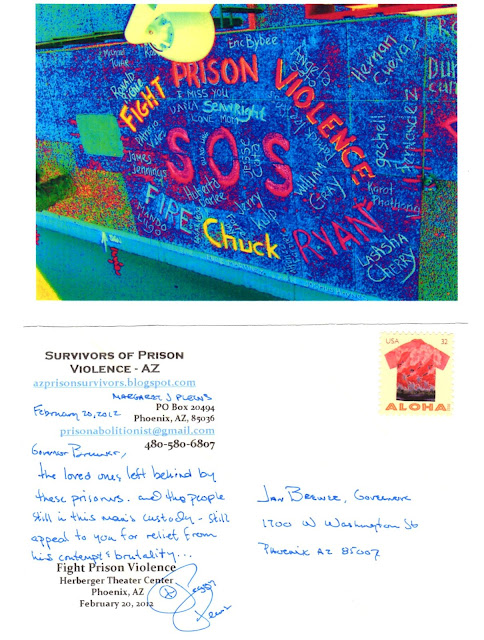 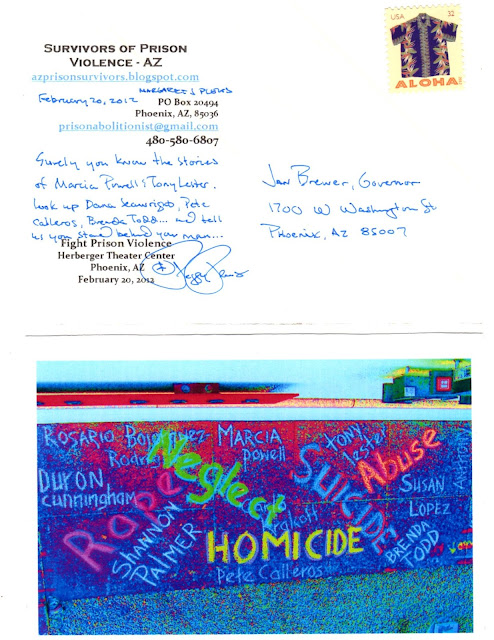 Anyone who is similarly moved to communicate with the Governor may want to do so in a public forum, so you can't be as easily ignored.

The address for the Arizona Republic is: