ARPAIO and the DOJ: We want a perp walk.


The DOJ just released a 22-page letter of findings, concluding that the practices of Joe Arpaio and the Maricopa County Sheriff's Office violate the 1st, 4th, and 14th Amendments to the US Constitution, Title VI of the Civil Rights Act, and Section 14141 of the Violent Crime and Law Enforcement Act. The feds threaten a civil suit to convince him to change his ways. It's just a letter, though, not an indictment - never mind the blood dripping from Joe Arpaio's hands.

People have been harassed, detained, arrested, abused, and neglected to death in Arpaio's custody, and yet his treatment of them doesn't appear to be a criminal case - not yet, anyway. I "loitered" in a public park after the posted hours at a protest, though, and immediately did 18 hours in Arpaio's jail. I may face more time yet for my graffiti and activism on behalf of human rights, and he's taking campaign donations as if he's running for office again. Texas Governor Rick Perry even courted good old Sheriff Joe's endorsement for the 2012 Republican presidential ticket...that sure says a lot about Perry's character, doesn't it?

I assume that the letter of the DOJ's findings is addressed to Bill Montgomery, Maricopa County Attorney, because his office will represent the county against any suit the DOJ actually brings (Arpaio's office has a private attorney) - all parties will fight at our expense, of course. Then there are the individual civil suits against the county and Arpaio that will all be bolstered by this finding; And there's the $99 million that he "misappropriated"; this man is costing American taxpayers a fortune.

What Arpaio's term in office has cost us, though, far exceeds the expense involved in both prosecuting and defending him - he also cost the public our safety through his harassment and by clearing real crimes by "exceptional" means. He pursued his racist agenda and employed discriminatory tactics chasing down "aliens" at the expense of solving child sexual abuse cases, rapes and homicides - is it any wonder that so many of the victims his office ignored were children of undocumented latinos?

For the harm he's perpetrated all of our communities - flagrantly violating human and constitutional rights in the process - I want to see that man prosecuted. He owes hundreds of millions of dollars in restitution to his victims and has done violence to people's lives, as far as I'm concerned, but right now the DOJ is just talking about "reform" and "remediation". Someday I hope we have no prisons, but until we come up with a better way to protect the public from racist, abusive and dangerous people, I want to see Joe Arpaio locked away by the feds, not put into outpatient rehab. We have far too many people locked up on drug charges to be squandering resources rehabilitating him. It's time to indict this Criminal Joe - and let our people go. 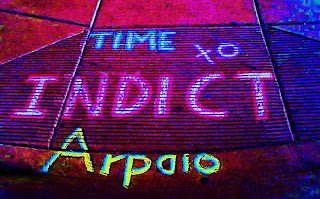 In June 2008, the Civil Rights Division opened an investigation of the Maricopa County Sheriff's Office (MCSO) pursuant to the Violent Crime Control and Law Enforcement Act of 1994 and Title VI of the Civil Rights Act of 1964. Following a comprehensive investigation, on December 15, 2011, the Justice Department announced its findings that MCSO has engaged in a pattern or practice of misconduct that violates the Constitution and federal law. The documents on this page provide more information about the investigation, the Justice Department's findings, and next steps.