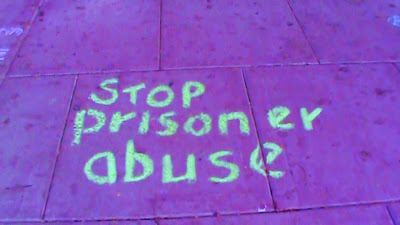 Sadly, the following press release comes as little surprise...good for the ACLU-AZ for picking this case up and seeing the victim through - they've been busy with our state prisons of late, too.

For those who haven't been paying attention to all the glory and acclaim that Corrections Corporation of America (CCA) has brought to the prison town of Eloy, recall the lawsuits alleging torture of 18 Hawaiian prisoners, as well as the sexual assault of a prisoner by a guard (who was subsequently prosecuted). Then there are the problems with their California prisoners - and what happened in Idaho...

Needless to say, anyone thinking about having CCA move into their backyard (and take over their town council) should really think twice: their leadership clearly fails to set and demand professional - or even humane - standards of treatment for prisoners.

---from the American Civil Liberties Union----

PHOENIX – The American Civil Liberties Union of Arizona today filed a lawsuit in federal court on behalf of a 28-year-old transgender woman who was intimidated, harassed, and sexually assaulted by a Corrections Corporation of America (CCA) guard while she was in immigration custody at the CCA-owned and operated Eloy Detention Center. CCA is the largest operator of immigration detention centers in the country and detains almost half of the 33,000 people in federal custody on any given day.

The lawsuit, filed against CCA, Immigration and Customs Enforcement (ICE) officials, and the City of Eloy, charges that local and federal officials failed to protect Tanya Guzman-Martinez from abusive male staff members at the facility in Eloy, even after being notified about the sexual attack and ongoing harassment by staff and other male detainees.

“Tanya left Mexico to seek refuge from the persecution she suffered because of her gender identity, and was exposed to even greater trauma at the hands of immigration officials who failed to take appropriate measures to protect her while she was in their custody,” said ACLU of Arizona Immigrant Rights Attorney Victoria Lopez.

During her 8-month detention at Eloy, one of the largest ICE facilities in the country, Guzman-Martinez was sexually assaulted twice. One incident occurred on December 7, 2009 and involved a detention officer who after repeated harassment, maliciously forced Guzman-Martinez to ingest his ejaculated semen and threatened to deport her back to Mexico if she did not comply with his demands. Guzman-Martinez immediately reported the assault to detention staff and the Eloy Police Department and the detention officer was later convicted in Pinal County Superior Court of attempted unlawful sexual contact.

Despite this attack, immigration officials did nothing to protect her from further abuse. In a separate incident that took place on April 23, 2010, Guzman-Martinez was sexually assaulted by a male detainee in the same all-male housing unit where she was subjected to the first assault. She didn’t report the assault to local police until about a week later because she feared retaliation by detention staff and other detainees. Soon after she reported the second assault to the police, Guzman-Martinez was released from ICE custody.

Although Guzman-Martinez was released from detention more than a year-and-a-half ago, she still suffers from the emotional pain she endured while at Eloy.

“When we tout our country as a beacon of freedom, fairness, and individual liberties for all, the United States, as well as state and local governments, and the people and entities with whom they routinely contract, must live up to those values, especially for those people who seek refuge in this country because of those values,” added ACLU of Arizona cooperating attorney Kirstin Story of the law firm of Lewis and Roca LLP. “Unfortunately, that did not occur in the Tanya Guzman-Martinez case and in many others. We hope that this lawsuit is a step toward remedying these failures.”

Today’s lawsuit alleges that CCA, Eloy, and ICE personnel failed to take basic steps to protect Guzman-Martinez’s physical safety and emotional well-being, to properly train and monitor the staff at the center or to implement best practices to house transgender detainees and prevent the sexual assault of vulnerable populations.

Incidents of sexual abuse in immigration detention, particularly among vulnerable women and LGBTQ detainees, are widespread, the ACLU said. In October, the ACLU of Texas filed a federal class-action lawsuit on behalf of three immigrant women who were sexually assaulted while in ICE custody at the T. Don Hutto Family Residential Center in Taylor, Texas. The lawsuit was filed following the release by the ACLU of government documents obtained through the Freedom of Information Act that confirmed 185 allegations of sexual abuse of immigration detainees jailed at detention facilities across the nation since 2007 alone. According to those documents, 16 allegations of sexual abuse were lodged in Arizona facilities – the third largest number of allegations after Texas and California. Of those 16 allegations in Arizona, 8 were from the Eloy Detention Center. In addition, the ACLU of Arizona documented five cases involving transgender or gay detainees who were sexually assaulted or treated in an abusive manner while in detention in Arizona facilities. The case examples are highlighted in the ACLU-AZ report entitled "In Their Own Words: Enduring Abuse in Arizona Immigration Detention Centers," which includes an entire section highlighting the array of problems confronting LGBTQ detainees.

Despite mounting documentation of widespread sexual abuse in immigration detention centers, the Department of Justice (DOJ) has proposed a rule that explicitly excludes immigration detention facilities from coverage under the Prison Rape Elimination Act (PREA). Congress enacted PREA to protect all persons in custody by setting standards for preventing, detecting, and responding to sexual abuse. “Without PREA's protection, immigrants in detention such as Tanya Guzman-Martinez, remain vulnerable to abuse,” added Lopez.

In response, the U.S. Congress will hold a briefing on December 7th titled: the Prison Rape Elimination Act and the Crisis of Sexual Abuse in Immigration Detention.

Lawyers on the case, Tanya Guzman-Martinez v. CCA, et al., include Daniel Pochoda, ACLU of Arizona Legal Director, and ACLU of Arizona Cooperating Attorneys Kristina N. Holmstrom and Kirstin A. Story of the law firm of Lewis and Roca LLP.

The ACLU of Arizona’s detention report is available here.
Posted by Margaret Jean Plews at 9:49 AM