Scottsdale PD and the Wrongful death of John Loxas.

PHOENIX -   The family members of John Loxas, Jr., who was killed instantly after being shot in the forehead while holding his infant grandson, today filed a wrongful death lawsuit against the City of Scottsdale and the Scottsdale Police Department. The 50-year-old Scottsdale man was shot in February by Officer James Peters without warning and despite having no weapon and posing no threat.

The lawsuit was filed on behalf of Loxas' daughter, Alexandria Loxas, and his father John Loxas, Sr. They are being represented by attorneys with the Chicago-based law firm of Loevy & Loevy and the American Civil Liberties Union of Arizona. The plaintiffs seek an unspecified amount of damages.
"My father was my best friend," said Alexandria Loxas, 23, whose son, Neo, now 14 months old, fell to the ground after her father was shot. "I felt safe knowing I had him in our lives because he was always there to protect us, and now he's gone forever."

In addition to listing Officer Peters as a defendant, the lawsuit also names Scottsdale Police Chief Alan Rodbell, arguing he failed to implement adequate policies to hold the City of Scottsdale and abusive officers accountable.   Officer Peters was involved in an unprecedented seven shootings over the past ten years - six of them fatal. A Scottsdale Police Department official acknowledged that Peters' history of shooting civilians was "an anomaly in our department, and in most departments." Peters also had a long history of excessive use of force against civilians, including dozens of incidents involving Tasers; he was the subject of four separate citizen complaints in the three months leading up to the fatal shooting of Loxas.

"There may well be no other police officer in the country who has been involved in more fatal shooting incidents over this time period," said attorney John Loevy of Loevy & Lovey. "Our lawsuit alleges that the Department had no business trusting him with a gun after he had killed so many other Scottsdale residents."

The incident that led to Loxas' death occurred shortly after 6 p.m. on February 14th, when police officers showed up at his house after he got into a dispute with his neighbors who called police.  Several Scottsdale police officers arrived at the house and confronted Loxas while he was standing in the doorway of his home. He was unarmed and holding his grandson in his arms. Without any warning, Officer Peters shot Loxas in the forehead with a scope-equipped rifle, killing him instantly. None of the other officers at the scene fired a weapon.

There is no indication that since starting as Police Chief in 2003, Defendant Rodbell has ever determined that a   shooting by a Scottsdale officer that resulted in death was improper or outside of police department policy.  The complaint outlines the inadequacies in the city's internal review process for officer-involved fatal shootings, including the failure to obtain testimony from civilian witnesses and the reliance on the involved officers' self-serving version of events.

For example, on November 7, 2008, two SWAT team officers shot David Hulstedt in the back, leaving him paralyzed from the waist down.  Despite the fact that Hulstedt - like Loxas - was unarmed and holding a child in his arms, Rodbell found the shooting justified and "within policy."  A federal court judge later concluded that "no reasonable officer could have believed that shooting David without warning, while he calmly walked back toward his house with the young child over his head, was a proper means of protecting [the child's] safety."

"What we have here is the total absence of meaningful review by the Scottsdale Department and City of Scottsdale even for deadly shootings done without warning and involving unarmed civilians," said ACLU of Arizona Legal Director Daniel Pochoda. "The clear message to Scottsdale officers, including Peters, has been: there will be no consequences, no loss of gun privileges, no matter how questionable or illegal the nature of the shooting."

In addition to Loevy and Pochoda, the plaintiffs also are being represented by Elizabeth Mazur and Elizabeth Wang of Loevy and Loevy, and Kelly J. Flood and James Duff Lyall of the ACLU of Arizona.
Click here to read the complaint that was filed today. 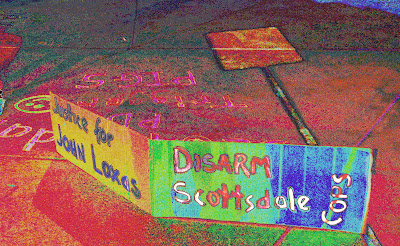